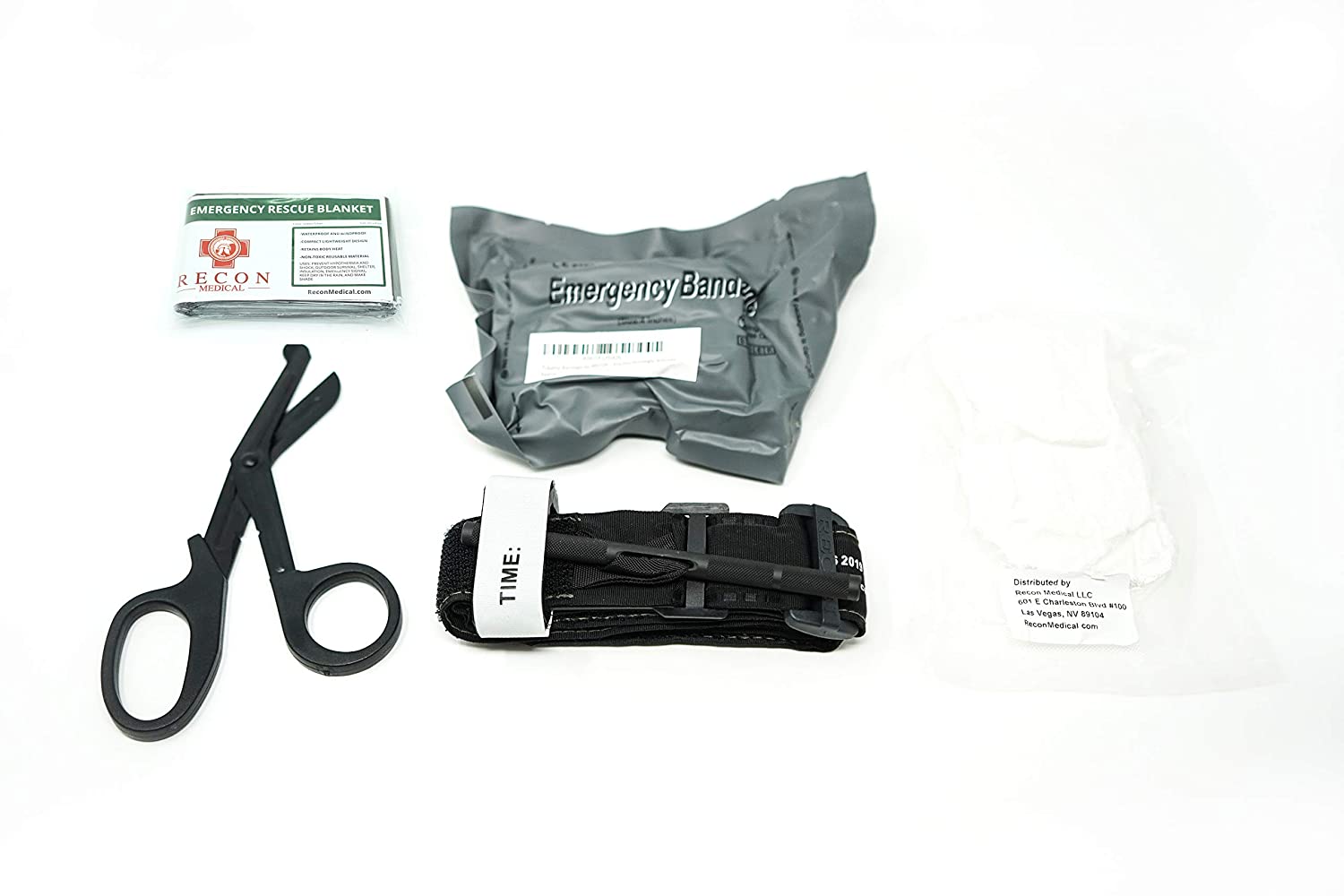 So while I was shopping around for some new gear on Amazon, I came across some products from Recon Medical. Needless to say I was interested from the get go simply because of the price point and features. Today I’m going to break down one of those products and see if it is worth it: The Recon Medical Kit.

The kit itself runs for about $25 and comes with their Gen 4 Tourniquet, a reflective space blanket, a trauma bandage, shears and a full carbon pencil. Overall not a bad deal right? Well let’s find out.

The star of the show in this kit is the Recon Medical Gen 4 Tourniquet, which alone retails for about $20. I have to say, even though it is not TCCC approved, I’m pretty impressed with it’s features. I’ve used NAR’s CAT TQ for a long time as a police officer and a 68W in the US Army, but one of the issues I had with them was the buckle and the windlass. Both were made of polymer and just didn’t inspire the level of confidence that I wanted in a piece of life saving equipment. So Recon Medical did exactly what I would have done, replaced or reinforced those parts with metal, namely aluminum.

Like the picture shows, the windlass is a knurled, aluminum tube that doesn’t flex and the buckle is molded around an aluminum skeleton. It’s rock solid, no flex, less concern for plastic breaking or getting brittle, what’s not to love? Oh and did I mention it even comes with a built in pen to mark time on the TQ? Because it does, built right into the windlass!

The kit also comes with a set of vacuum packed gauze and trauma bandage. The gauze is nothing special and does not feature any type of hemostatic agent like Celox or Quik Clot. Same goes for the trauma bandage, nothing to write home about, but looks like it will get the job done. Me personally, I supplemented this kit with Celox Rapid Ribbon, chest seals from North American Rescue and T-BAN Minis from JBC Corp.

That being said, I still keep the supplies that came with the kit as backups and extras. Never hurts! The next item is the shears. EMT or Trauma shears can be way better than a knife when it comes to removing clothing to get to an injury, and I’m glad this kit comes with them.

The shears are totally adequate, pretty strong, simple and effective. You can’t really ask for much more, I mean they aren’t Leatherman Raptors after all. The other 2 items in the kit are the Carbon Pencil and space blanket, some kits don’t come with the carbon pencil anymore, but instead with the built in pen in the windlass.

Overall I think for the money, the Med Kit from Recon Medical is a great buy. I keep one in my range bag, my go bag, my glove box and I often give them away as gifts and in little contests. They also come with a Life Time Warranty, which I thought was funny, like so if it breaks and I die, do I get my money back? I guess it’s the thought that counts. If you’re interested in watching an unpacking video you can check that video out here.